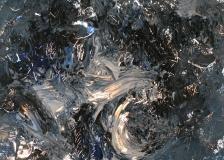 I would like to propose an exhibit of two parts; in the first instance an experiment, part performance, part interaction on the opening night and the results of that experiment displayed.

The event itself is supposed to feel like a game, like a corporate or wedding ‘photo-booth’ souvenir, something to engage with for fun, yet there is much more to the transaction.

SUBJECT CUTS AND SHUFFLES A DECK OF CARDS

SUBJECT AND PHOTOGRAPHER PICK A CARD

In the first instance, I build a small pleasant environment with a lush red velour curtain to play the game within the gallery. This, very much, relies on novelty, emulating the feel of the now obligatory fun photo-booth at every wedding, birthday and office Christmas do, offering up more and more celebrations to the ‘Data-Gods’.

The first in the moment when the card is turned over, where anticipation becomes reality and fate is sealed. Shot with a ‘Hasselblad X1D-50c’, this image is an attempt to capture all the micro expressions that come with the acquisition of specific, indubitable knowledge, the look of realisation where confirmation bias is replaced with fact. Yet knowledge is subject to context and we are constantly subject to confirmation bias so, not only can these facial expressions be mis-read without context, they may not at all be flattering. This is the first step away from the party. These are the images to be displayed in a gallery setting.

The second is the cheesy clown portrait that everyone wants to do to declare their feelings about the outcome, where, within minutes, the subject can access and download their portrait from an online gallery on my website; the souvenir. Everyone’s a winner.

The reason why they money is important is the same for any card game. Without the stake, it’s just horses running around in a circle with brightly coloured little people on their backs. Money, whether paper, card or bit, as an inter-subjective reality is something we have all agreed is important. Participants are more than welcome to pay a penny for a portrait, however, that portrait has then been assigned a value of one penny. What does that say about a person compared to someone happy to put in a £50 stake. The participant has already bought the image, what ever the price, the excitement in playing the game entirely depend on the value of the stake. Let’s say them most expensive work in this room has a price tag of £25,000, however, until someone with £25,000 to spare agrees, that value is up for debate. If someone were to play this game for £25,000 and for the turn a higher card, would they not have acquired a £25,000 portrait of themselves for free? Who has the better deal? Nothing is free in this game.

My own confirmation bias is that whenever I have done this in the past, most people bet generous pennies, however, whenever someone put paper money down, including the odd ‘nifty’, they all got free portraits.

He who dares wins?

Not really; I am no magician, there is no fix during the game I am holding the camera, at no time do I touch the cards. I know the cards are random, yet part of me believes in luck… the ‘Confirmation Bias’ part. Yet I still believe.

The goal for me is to create a situational circumstance that can produce a portrait as close to momentary honesty as possible, in this case, with just the turn of a card, this, again, is why I have no reason to cheat the game in any way, it would defeat the purpose.

The images are an attempt to demonstrate, that, even the simplest of actions can be interpreted in any number of ways, as with the reading of expressions. Whether displayed on a monitor slide show or as printed photographs, the outcome of the game will not be presented with the image. The audience at the time will have witnessed the outcome, the subsequent gallery audience will be left to interpret the image, forcing their own confirmation bias to make a decision.

So what is my stake in this? My family has a history cognitive disorder issues. My mother has lived with some form of ‘Face-blindness’ her entire life and I in turn have been pursuing my own diagnosis as, while some of the traits of this condition resonate with me, not all of those pieces fit. I do feel that ‘Prosopagnosia’ should have a less comedy colloquialism, one that does not initially conjure up a scene from an episode of ‘Dr Who’. Think more of being born with a little gang of neurons in your brain that are pointing the wrong way, leaving you with a wafer thin slice of a kind of social ‘Alzheimer’s’. Perhaps, where the misreading of certain social cues gives responses that miss their target over time builds an impression of someone that obviously wants to be alone; ‘Refracted Arsehole Syndrome’ maybe.

I have vehemently avoided any self-diagnosis, I can say that, I am either not overly inclined to be part of common social groups so my ‘Phatic’ language skills are a bit off at times, or vice-versa. In whichever order, the outcome is the same. Let’s try this “Reptile Brain to ‘Reptile Brain;

Your ‘RB’ meets my ‘RB’ somewhere. Your ‘RB’ is part of a club that your ‘RB’ is naturally proud of, yet for some reason, my ‘RB’ is giving yours the impression that my ‘RB’ is not much interested in your club, there is no clear reason for this so it is confusing and confusion is bad. You go back to your group and report on the person that confused you and your group will give you an answer that makes sense.

I am no natural performer, I have no desire to put myself on show. If anything the opposite is true. In fact, I am infinitely more comfortable occupying a space in a gallery as an exhibit, than I would be as a guest having to mingle. In this context I have my world with my rules and a camera around my neck for that one last invisible separation. In here I am perfectly safe and you are all welcome. If this is what I have to do to demonstrate a point then so be it and once it’s over, if we pass in the street one day in the future and I ignore you, feel free to remind me I’m not an arsehole!

In an effort to halt the flow of time, for those who want to remember what surprise looks like once we have everything we want.